It was a plan that Vince and I crafted weeks in advance. It might have been when we were wandering the streets of Macau or while we were working out at the gym. I had my flight to Osaka, Japan leaving on Sunday but nothing was planned for Saturday. He was thinking of flying out on Sunday or Monday as well. Which made us think… maybe we should hit Hong Kong before we fly out. His plans changed a lot but he was still game to hit Hong Kong before I flew out. So we bought ferry tickets and made hostel plans.

This time I was going to plan! I was going to be the person saying let’s go here and let’s do this and then let’s do that! Of course, best laid plans…. you know. In the meantime, I had a couple of weeks to get through and during that time I discovered Groupon for Hong Kong. I could order stuff and pick it up at their store, super easy! I also decided to jump on a ridiculously cheap deal for all you can eat dim sum. So my plan was that we head to dim sum, swing by Groupon, hit Victoria Peak for the views, explore a market and call it a night. Then Sunday we would hit up dim sum and I would split off and head to the airport to fly to Japan.

When the day came we hopped on the first ferry to Hong Kong. We arrived and realized the time window for the dim sum did not work. You see, the place requires that you come at certain times for the dim sum and we were a little too close to that time to make it. So we decided to make that our second stop of the day, the first being our hostel. We were not able to check in but I could leave my bag there and pick it up later when we did have a room assignment. We headed back toward the elevator where we met a guy named Elliot who was spending time in Asia as a reward for getting a job he worked hard for. He seemed like a decent chap so we invited him along to our outing for dim sum. We had a few hours to kill so we went looking for a music store Vince wanted to check out but it had closed that location. We also checked in on the Groupon store but it had a 45 minute wait so I decided to put it off until later. We decided to head to the part of Hong Kong where our dim sum joint was. It was on the Kowloon part of Hong Kong and was a couple of subway stops away.

When we arrived at Mong Kok station we got off and headed out according to our phone maps and the map on the wall at the station. We walked right out into a street market and we took our time wandering through there. It is known as Ladies Market. We saw a lot of great stuff for sale and I purchased a selfie stick for my upcoming solo trip to Japan. I was ogling a few games they had for sale there but I was not headed home I was headed to another country for 8 days so buying games seemed foolish. We finally arrived at our dim sum spot, Marvel Teahouse, and when we tried to check in we found out that not only does the time matter but so does the need for a reservation. We were not able to eat there that day because they were too full…. or something, because they were not full. Vince saved the day by looking up dim sum on app he had and we walked a ways to the closest one and ended up having very good dim sum that required no reservation.

We headed back to Causeway Bay and to Windsor House so I could go to the Groupon store. This was a mistake because I was stuck at the Groupon store for 2 and a half hours waiting in line. Vince ran off during that time and checked us into the hostel. He also picked up something at a different Groupon store for me, a fitness band and scale to begin paying attention to my health. He walked in and out of that location within 10 minutes, apparently the Groupon store I was waiting at was not very well-organized. When he got back I still had 45 minutes to kill so he wandered off again. When I finally got the sim cards I had ordered for my Japan trip I realized Groupon was a bad place, a bubbling spring of evil. I vowed never to return again, at least not until after the trip because I had ordered something that could not be picked up until then…. yay!

When I was done we ran to the hostel real quick and dropped items off and then headed out to the night market. It was back near where we had been before, the Kowloon side of Hong Kong. It was like every other street market I have been to, it had narrow lanes to walk through and the stores were made from metal poles and plastic tarps. Some places had tables piled high with stuff while others had a less crowded space. There were all kinds of souvenirs: magnets, shirts, tea sets, bowls, books, and things to hang. There were also a lot of flash cards that were little cartoon characters or cameras. They had toys and electronics as well. We bought a bunch of things; I got a set of bowls with a hole to place chop sticks through, a fat Spiderman luggage tag, and a memory card for my bootleg GoPro. We then had a late dinner/snack nearby. It was fried dumplings that were really good and some fresh juices. After we ate we headed back to the hostel to sleep.

The next morning we ate dim sum at a place near the hostel before I headed to the airport to fly to Osaka, Japan. The place was pretty decent but it is not a place I would go to unless I found myself at that hostel again. To get to the airport I had to ride the subway a few stops and then take the Airport Express line there. It takes like 25 minutes to get to the airport this way but the bus would take at least an hour. The train was fast, easy and comfortable and even with the cost I would recommend it to anyone in need of a quick ride to the Hong Kong airport. 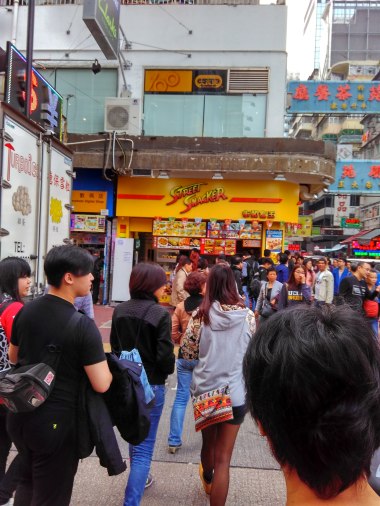 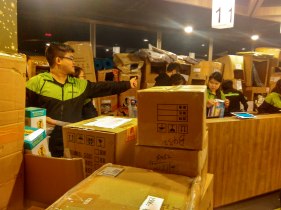 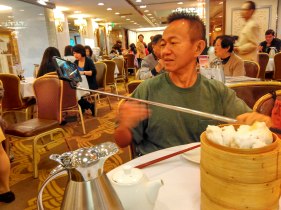 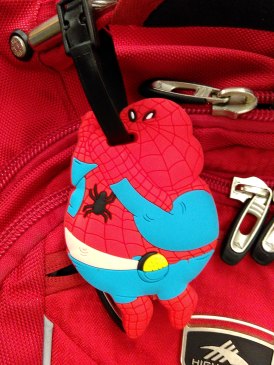