It started out with a group of 4 of us deciding to see Chinese New Year in Hong Kong. I was mixed on the idea because I was afraid of the crowds that I imagined crawling through the city. What ended up happening is that, with the exception of a few events, Hong Kong seemed empty and closed. It was a nice time to go and experience Hong Kong as long as you aren’t planning on hitting up museums or anything that might be closed due to the holiday.

I decided to go to Hong Kong on Sunday with 2 ladies, Heather and Sunia. Vince went on Saturday and had expanded the group to 7. He was in Hong Kong with Kai, Tami and Tami’s son. We arrived and headed toward the hostel. I was going to meet Vince there and then we were heading to dim sum with Tami. Kai was taking Tami’s son to the Flying Pan for American style breakfast. heather and Sunia were going somewhere else. They planned to meet up with us that evening. Kai and Tami’s son would rejoin us after we all ate.

The place we went to dim sum at was nearby the hostel. It is called Dim Dim Sum and has a photo that shows that it is one of the 110 best places to eat. I am not sure if they mean just in Hong Kong or if it expands worldwide. The dim sum there is good but not legendary in my opinion. The item that I think they do the best is pineapple buns. Inside the bun is a pineapple custard with real chunks of pineapple. The other thing I really like is actually a rice roll. A lot of the time when I eat dim sum I get a rice roll with bbq pork but this is a rice roll with a crispy shrimp roll inside. I am not sure why I like it but I do. We also ordered shrimp  and pork dumpling, bbq pork buns and a bbq pork rice roll. I feel like we might have got something else but I am not sure what. It was good and we were happy so we headed back to the hostel to meet up with Kai and Tami’s son.

The plan was to head over to the flower market that was nearby. This was the first super crowded place we would go to during our visit. It was a ton of people walking through wide aisles that seemed to be filled with crap I didn’t want to buy. Not that I was close to actuallly see because we were in the middle. I was hating this place and the minute I saw a clear path toward the exit I bailed and told them that I would see them at the clock tower in Tsim Sha Tsui. 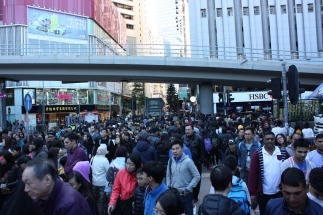 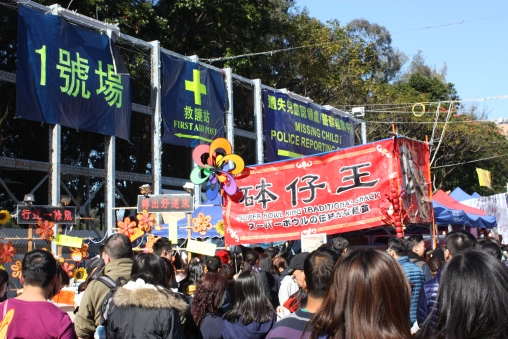 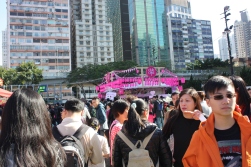 The Tsim Sha Tsui Clock Tower is a landmark and it is on the Kowloon side. We had been on the Hong Kong island side. Getting there is a simple navigation of the Hong Kong metro and then a little walk from the station. As you walk toward the Tsim Sha Tsui Clock Tower you cross by a few museums and a performance hall. Apparently this is also where the boardwalk of the stars is with the Bruce Lee statue. I would have went and looked but it was closed because all of the parade floats for Monday night were parked there. So I looked through the fence at large balloons and other things I would see the following evening. 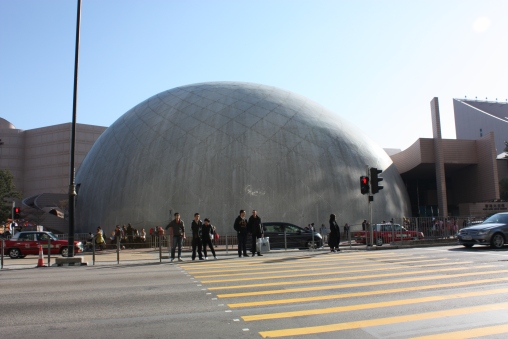 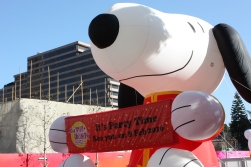 I was not sure how long it would be until I was joined by the rest of the party so I walked over to the Star Ferry terminal and bought a green tea gelato. I walked back over and took a picture of the sign in front of the tower and the monkey scene behind the tower. There were also dancers and drummers practicing for the parade the next day in this area so I took a picture or two of them.I took the last bite of my ice cream and sat down for a minute. Of course that was when everyone showed up. 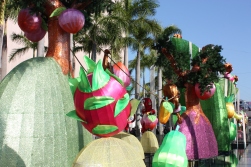 Everyone was ready to eat again so we wandered down to The Spaghetti House. I ordered a sundae (I guess I needed some ice cream). My sundae was okay, although one of the ice cream scoops was a little icy. The service sucked and I don’t plan to go back there.

The reason we were all on the Kowloon side was because Heather had booked a Junk Boat night cruise. So after dinner we headed back and stood in line waiting to board. Eventually the boat arrived and we watched as they helped people get off the boat, occasionally pausing while the wake from other boats caused the boat to move away from the dock. There was a decent space between the ramp on the dock and the ramp on the boat even when it was close together. So when it was time to board I headed over and was stopped at the top as the boat pulled away and then moved quickly when the boat moved back in. We all had decided to get spaces up top. Unfortunately the comfy lounge chairs were already claimed so we took up the seats at the back railing.

I was taking pictures and decided to take a picture of the sails above us. The sails are purely ornamental because the boat has a stinky engine. I took off the lens cap and had it in my hand. I leaned back, set up the shot and the flash flipped up and nearly knocked my hat off. I moved to catch my hat and lost my lens cap. This was a little distressing but I decided it wasn’t that big of a deal. I would just try to buy a replacement in the next couple days. On a night cruise you get a drink of your choice so I had a beer and we set sail. I took pictures as we cruised across to the Hong Kong island side to load more people. Then we set sails and I took less photos. I am not an expert at night photography and I was having trouble capturing what I was seeing. So I have pictures but not as many as I would have liked. 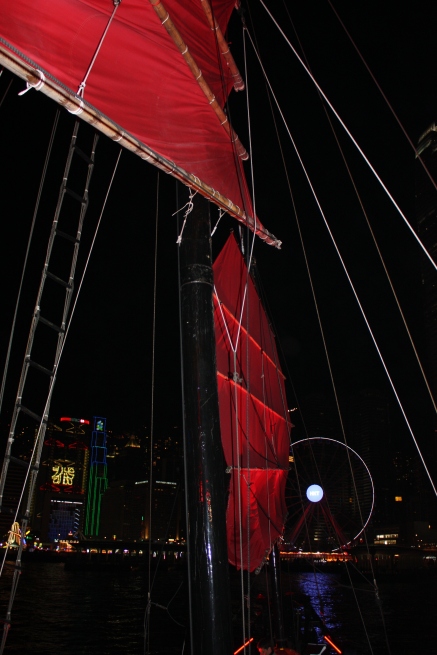 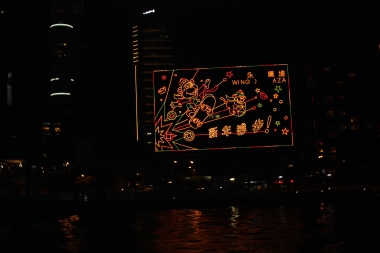