We were picked up by a nice and chatty tour guide at our hostel. We got in the van and headed to the opera house. While we were en route Vince spoke to the tour guide about having the driver drop us off at Donghuamen Night Market when the opera was over instead of our hostel. We were dropped off in front of Huguang Guild Hall. I don’t know about you but I am the first to sign up for experiences that are authentic even when they are out of my usual comfort zone. I have never been to an opera but Peking Opera is pretty famous and definitely something that has been part of the culture of Beijing for a while. So I had signed up for it after checking with my dad to see if he shared my interest. I had no idea what to expect at all and had left a lot of the choice of locations up to Vince. He was not interested in the touristy one held at a hotel. He wanted a theater that had some history. That was why we ended up in Huguang Guild Hall, it has been around for over 200 years. The inside was dimly lit and as a result most of the pictures I share will be thanks to Vince. He was able to get shots of the translations and he loaned me an iPhone 4 to use while my dad visited. I brought my phone but it decided to have a glitch where all my images taken grayed out and are unrecoverable. I left my camera at the hostel because I knew I could not use flash and without a tripod I can’t hold it still long enough to get a usable shot.

The hall has a lot of colorful designs painted on the stage, walls and ceiling. There are several lanterns hanging on the ceiling as well and they had scenes painted in them but I could not pull off that shot because the light coming from the lantern overtook the paintings on the lantern. The back of the stage has a vibrant yellow curtain with images painted on it. The seating was wooden chairs surrounding a table with snacks. The snacks were peanuts, strawberry fig newton type things, mandarin oranges and dried prunes. We also had some jasmine tea with that and then we all ruined the Chinesiness by ordering sodas. 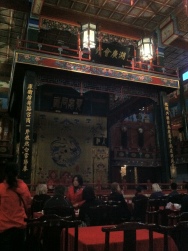 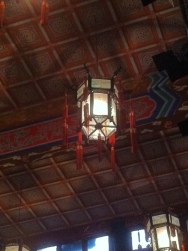 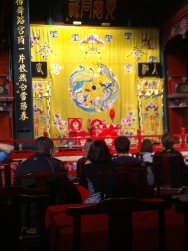 To the left of the stage was a screen that they would have translations of what was being said. This made the Peking Opera ten times more enjoyable because the first opera was about a war chief who had lost a battle who was being consoled by his concubine. He wanted to drink his sorrows away and she encouraged that and said she would sing to him to help soothe him. Her voice was making me giggle because it was nasally and not at all seductive. The war chief yelled all his dialog and I found it pretty darn funny.

The next story was about sky gods and a woman coming to get a magical weapon from them. This one was pretty cool. They were very acrobatic and had a fun fight scene. She had to prove herself worthy to get the weapon. She was getting it for her husband…. But after watching her fight for it she should have just claimed it for herself and laid waste to all her enemies.

I would definitely say that the Peking Opera is a must see. It was fun and very interesting. Of course the younger Chinese employees at the hostel were amused that we liked it because they hated it. Oh to be young. Anyway, I am not sure that you need to go to our guild hall and I probably wouldn’t have had it been just me going. I would have been fine going to the hotel with the rest of the tourists. Don’t get me wrong, the Huguang Guild Hall is nice and the translation is definitely a benefit.

I always find it funny that people want to avoid being touristy when they visit a place that isn’t their home. Why not? You are a tourist! Don’t act like an ass, be nice, be interested, be curious and be ready to have an experience. You are here to see things and the touristy spots are touristy for a reason. People want to see whatever it is and so they go there. Why not go there and indulge. Take selfies, pose in front of things and look silly, and hey why not pay someone in a costume to pose with you? You will get more out of life if you worry less about how you are perceived. I can’t stand people who look down on people having a good time as a tourist. If you can go through the world, curious and courteous you are doing fine. So give in to the guilty pleasures. Take pictures of your food, of yourself, of the mazing sight before you; and if you run into anyone who thinks you are a fool, laugh at them because they will never have as much fun as you will.

The show only lasted an hour and we headed out got picked up by the driver and were taken to Donghuamen Night Market. At first when he let us off we were confused because we were in a shopping area and we did not see a street filled with food vendors. I stood in line and got a pancake filled with mung beans because it smelled good. It was pretty tasty too. As we walked we got an eyeful of scorpions, other bugs, seahorses and sea stars on a stick. The scorpions were still moving on some of the sticks. Then there were vendors selling dumplings, baozi, noodles, tofu (both the spicy and the stinky variety). They also had stalls selling souvenirs and trinkets. My dad and I both got hats from different vendors, it was my dad’s first real attempt at bargaining. He did okay but I had to do a better job when I got my hat. So I paid 3.40 and he paid 4.60 for his hat. Nothing like arguing over a dollar. We tried some fried baozi that had hardly any meat and was way too pricey for what we got. I feel like we tried something else but whatever it was has been lost in my memory. We eventually headed back to the hostel, after like 7 passes through the area. We left no stone unturned. 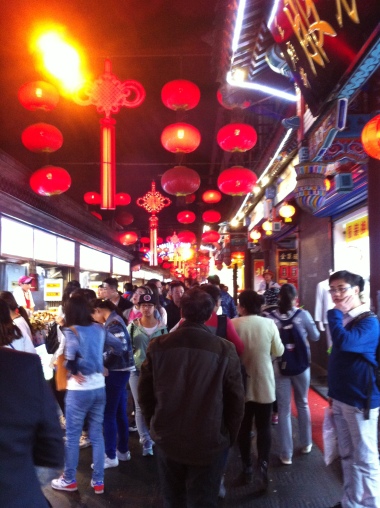 2 thoughts on “Beijing With Pops: Part 2”